Why economists need to lead the conversation – not follow

If economists don’t lead the conversation on economics – you can be sure that others will. In this post Marianna Koli outlines some innovative steps towards improving economic communication and why economists should take note – even if this means loosening professional precision in favour of a public message that sticks. 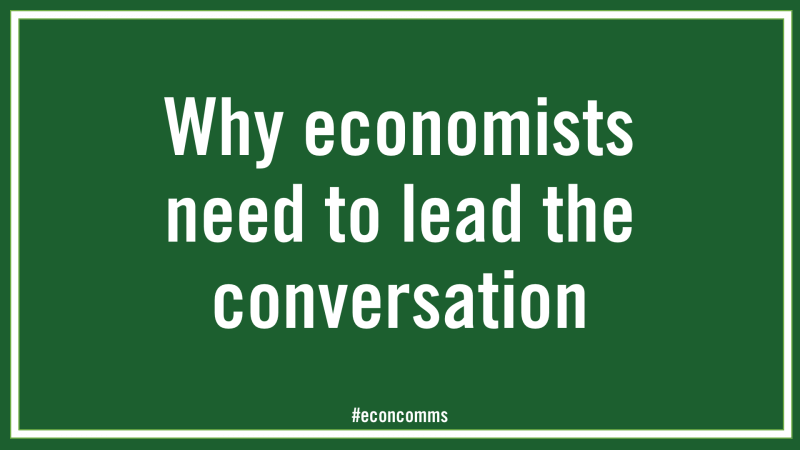 Economists often report findings as if the value of an economic conclusion were enough in itself: scientific soundness is all that is required to send a strong message, so the thinking goes. But effective communication requires a different perspective. Should we instead evaluate economic messages by how compelling and relevant they are to recipients? After all, a message is only valuable if it is meaningfully received and used.

Some innovative examples of economic communication training are in progress: in the United States, Stony Brook University trains academics in speaking to the general public, including useful tips for dealing with journalists – such as don’t bury your best point in your final paragraph!

My institution, New College of the Humanities in the UK, is soon to launch a nontechnical MA programme in Economic Policy and Communication for graduates of any discipline seeking to be fluent in economics and translate economic conversations for non-experts.

As well as formal higher education courses on communication, many economists around the world are driving change, however decentralised, toward good economic communication and better policy impact. So how might economists set up such endeavours, even without explicit institutional support?

First, technical economic arguments can be presented using the techniques of other fields, which might feel more familiar to audiences than the presentation style of economics. For example, Raúl Pacheco-Vega has set up a university course in public policy using storytelling techniques: he uses his audience’s prior experience of how stories work to make sure his theoretical messages hit home.

The study of language and culture also features in the Stanford University Literary Lab’s study of changing language patterns in World Bank reports. Using techniques in linguistics, they find that between 1946 and 2012, World Bank reports became considerably harder to understand, as concrete ‘rivers, farms and railroads’ systematically turned into abstractions such as ‘issues of global concern’.

But discovering such problems does not always mean they are easily solved. In response to the Stanford report, World Bank chief economist Paul Romer tried to bring about practical changes, but they were not well received by economists. Romer later reflected: ‘It’s possible that I was focusing too much on the precision of the communications and not enough on the feelings my messages would invoke’ – even the economists had non-economic concerns! Economists would do well to remember that most audiences are the same.

A further point of positive impact through economic communication is finding the right types of expertise and the right messages for the right audiences. Duncan Green of Oxfam describes how academics’ long-term interest in a given topic over time is well placed to ‘combat institutional amnesia’: through the mentoring of new employees, academics can renew and replace the tacit knowledge (for example, historical policy successes and failures) that is lost through high staff turnover in non-governmental organisations. In other words, a well-communicated and well-targeted academic message, repeated over time, can be invaluable to organisations where short-term projects are the norm.

These three initiatives have three different audiences: students, fellow economists and NGOs. What they have in common, however, is that they look to non-economic fields for inspiration. The use of storytelling, linguistics and organisational studies for crafting messages requires economists to come out of the economics pigeonhole and, in doing so, they may well discover new ways of approaching communication.

Why should economists learn more about communication?

Students, economists and NGOs are an excellent start, but they are ‘captive audiences’ with strong incentives to understand economic messages. The mainstream media and general public are more elusive audiences. Almost all have experience of economic ‘life’: most are responsible for their own finances and ‘run’ a household; some have studied a little economics. But a basic background in economics is rarely enough for understanding professional economists. With this in mind, what should economists understand about communication that would help avoid common errors?

As Paul Romer admits, economists often focus on the precision of communications. The general public’s economic conversations, however, might not replicate the original precision. Prominent economist and blogger Simon Wren-Lewis discusses the use of the term ‘recovery’: for economists, a recovery is a return to a growth trajectory, whereas consumers associate it with a return to pre-recession levels – but since incomes only return to pre-recession levels after a period of recovery, there is a time lag between the two. If economists say ‘a recovery is underway’, but consumers do not see it, either economists or reality must be wrong, and most people find reality more credible!

For economists, it is not always easy to anticipate the ways in which our specialist terminology might sound similar to everyday words and concepts, but have a different meaning. But we should move away from the idea that clear expression is insulting the listener’s intelligence. After all, economic terminology is often used incorrectly, even by high-level politicians.

Examples abound. Modern trade deals involve substantial negotiation of non-tariff barriers, but these are rarely taught on introductory economics courses, because they are conceptually and algebraically harder than quotas or tariffs – so among those who have only read basic economics, ‘trade’ and ‘tariffs’ are a common word association. The Conservatives’ ‘dementia tax’ was not a tax, but the name was credible, because it involved citizens paying money to the government (and a three-letter word is more convenient for headlines than ‘cost of social care’). Pension funds are not bank accounts where money is collected into an individual pot for later withdrawal: ‘you have paid it in, so you should get it out’ is a great political soundbite, but it is not how most pensions work.

Should economists worry about these misunderstandings when talking about their findings? The realities of journalism set some hard constraints: most journalists are not economic experts, but they hold the platform for the fast labelling of complex things, such as the ‘dementia tax’. Therefore, we might need to say things in ways that sacrifice some professional precision, but may well improve the quality of the message that is received and re-distributed at the other end.

Importantly, communication is not just about the transmission of complex ideas. In a world of social media – where news is distributed by anyone, regardless of their expertise – we need to ensure that our communications realistically enable further conversations in the places where opinions are shaped – on television, in living rooms and on social media.