Tips from Dr Marianna Koli on talking to the media

Inspired by a desire to enable students of any discipline to become excellent communicators of economics, Dr Marianna Koli has set up a unique course in Economic Policy and Communication at the New College of the Humanities in London. Here Marianna shares some of her top tips. 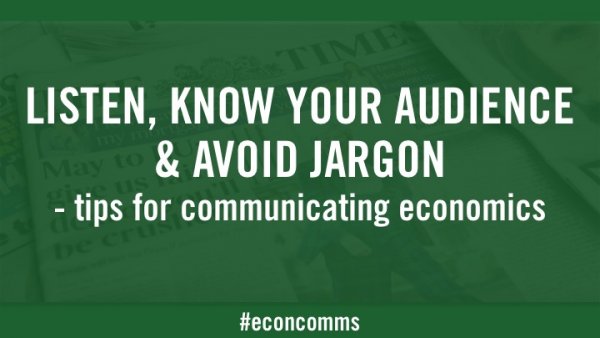 The vast majority of media opportunities for economists are to comment on new data or events, and we are often asked for predictions. How can we make ourselves useful without having to misrepresent the knowledge the field has produced?

In order to be relevant to public conversation, economists should engage with the wider context of economics – and we should not be afraid to link our analysis to ideas and events outside the economic sphere. Here are some suggestions for public communication of economic ideas, whatever your specialist field may be.

Don’t give an answer before you understand the question.

When asked for a specific prediction, economists would do well to ask what might be the underlying concerns. For example, new inflation data might prompt the question: ‘For how long do you think inflation will continue to be over 2%?’ But the real question is probably not just about inflation. Perhaps instead it is: ‘Are we headed for really difficult economic times?’ It could even be: ‘Was Project Fear real after all?’ A numerical prediction might not always be the best answer.

This makes public communication of economics rather different from the teaching of economics. In the mass media, there is rarely time to craft a sophisticated argument. Therefore, good public communication requires intelligent guesses about the motivations of questions – and addressing those underlying interests, even if they are different from the exact question that is being asked.

Say what you know in the real world, and don’t worry that it’s not a perfect world.

Your role as a public commentator is not just to provide factual information. Journalists can find and report facts by themselves. You are there to provide context and perspective, and to point out relevant things for your audience to think about. You’re not just filling up an existing mental filing cabinet; you are helping to build the cabinet. Your general observation of trends can be as useful, if not more so, than facts and figures.

For example, it may be difficult to predict exactly how many jobs might be lost or created by a policy (a point that is well made here). While there may be a temptation to ‘guesstimate’ an overall effect (a national effect, say), it can be more interesting to comment, for example, on how the gains and losses of a policy are likely to fall.

For some, this might be reminiscent of US president Harry Truman’s request for a one-handed economist. But acknowledging ambiguity need not mean giving non-answers: ‘I cannot answer that’ (why are you on TV then?) or ‘it depends’ (on what?). It means being able to say: the world is complex, but here is how I see it, and suggest a few ways in which one thing might lead to another.

Understand the world your audience lives in.

Your main interest may be in economic matters, but that is rarely the case for non-economists. While you are of course invited to comment as an economist, it is sensible to be aware of what else is grabbing attention at the same time.

For example, when making the economic argument for Remain in the UK’s referendum on membership of the European Union (EU), many economists stuck closely to economic commentary, and showed little awareness of the wider conversation. Public communication of economics is usually related to some current political event, and the aims of political and economic rhetoric are very different, particularly around elections and other high-pressure events.

To get votes, politicians need to be seen to seek change, and in many cases that means opposition to the status quo. Macroeconomists, on the contrary, tend to get most worried about changes that cause mismatches between different elements of the economy: inflation with incorrect expectations, loss of jobs with no time to retrain, or oil price shocks before renewable energy becomes widely available.

The default position of economists, therefore, tends to be to prefer stability or gradual change. This may contradict popular political messages, and economists should be mindful of these. For example, Brexit supporters may dismiss the economic argument for good EU-UK trade relations by saying that short-term economic discomfort is a price worth paying for sovereignty.

Are we, as economists, trying to understand the logic of this view? Are we helping those who hold this view become aware of the long-term consequences of the ‘no deal option’? For example, perhaps this piece could have separated the transitional problems of a no-deal Brexit from the permanent ones. In this way, we acknowledge the sovereignty argument, but also present clear arguments for not walking away from EU negotiations without a deal.

Last but not least, avoid jargon.

Many academic economists feel the value of economics is in its unique position as a quantitative social science, thus seeing economics as a toolkit or collection of methodologies (further exploration of this idea is here). In formal academic writing, this may well be a good approach. But the general public tends to see economists simply as people who know about the economy. Technical detail rarely adds to their understanding.

If a piece of policy terminology becomes an everyday term, it may be necessary to discuss its meaning. A recent example is ‘net migration’: it is not uncommon to see an interpretation whereby zero net migration would mean no immigration, which of course is missing the point of the word ‘net’.

But if specialist terminology is not already present in the debate, it is usually best to avoid introducing it. Instead of making the argument more impressive, it might switch off interested viewers who wrongly assume your message is too complicated for them. Even a basic term like ‘statistically significant’ means little to most of your audience. In media work, unlike in teaching, there is no expectation to improve the audience’s knowledge of specialist terminology. Most of your audience is hearing you for the first and last time. Work with their existing knowledge base.

Dr Marianna Koli runs the postgraduate programme in Economic Policy and Communication at the New College of the Humanities in London, you can follow her on Twitter: @mariannakoli, where she often tweets to the hashtag #econcomms.