Six Rules for Writing About Economics

Criticising economics is en vogue. This may be partially be due to the discipline’s limitations and failures; at other times such criticism may be politically motivated, because the advice economists give can be uncomfortable for policy-makers. 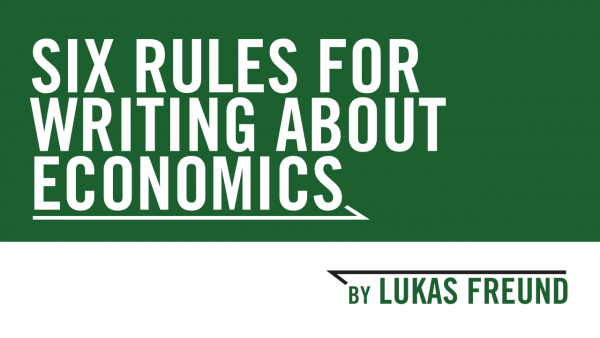 Paul Romer, Chief Economist of the World Bank, has underlined that the way in which such advice is communicated is no less important than its content, urging economists to be clearer and more precise in explaining their research findings and expert analysis. This has prompted me to think about how that can best be achieved, particularly regarding the use of mathematics and words in economic writing. [1]

Mathematics is often supremely helpful. It can aid economists (and others) in clarifying and expressing their thoughts succinctly. Furthermore, it prevents unwarranted jumps in reasoning. Indeed, in some research areas, we might need more (and more difficult) mathematics in order to enhance the effectiveness of public services and policy. [2] However, using mathematics well is also difficult. Three potential problems are as follows.

1) Mathematics may be “decorative“ in the sense of making the model and argument harder to understand yet without adding the essence of the model and its implications.

One of several reasons for using such decorative mathematics may e.g. be competition on the academic job market (where technical skills help stand out). However, this practice can make it more difficult for the researcher themselves to gain insights into the critical mechanisms at work. And it makes it hard for the audience to follow the reasoning presented.

As Nick Rowe pointed out, Joan Robinson went as far as stating: “I never learned math, so I had to think.” We don’t need to go as far as Robinson (I certainly wouldn’t) to acknowledge that near-automatic reliance on mathematics might come in the way of what ought to be prior steps. Thus, Paul Krugman writes that “many misunderstandings in economics come about because people don’t have in their minds any intuitive notion of what it is they’re supposed to be modeling.”[3]

3) Mathematics may permit or encourage the creation and use of “chameleon models” where mathematics and words (and/or conclusions) are divorced.

Paul Pfleiderer defines a chameleon model as “built on assumptions with dubious connections to the real world but nevertheless has conclusions that are uncritically (or not critically enough) applied to understanding our economy.” As Dietrich Vollrath writes, this is probably what Paul Romer’s critique of “mathiness“ most directly refers to: “[Mathiness lets academic politics masquerade as science. Like mathematical theory, mathiness uses a mixture of words and symbols, but instead of making tight links, it leaves ample room for slippage between statements in natural versus formal language and between statements with theoretical as opposed to empirical content.” (See also Brad De Long on this).

To a not insignificant degree, such a gap between words and conclusions is problematic because economics, on the one hand, and politics and policy, on the other hand, are so closely intertwined: Economics is necessary for good statecraft and will inevitably used for political ends; conversely, politics affects the economy and, no less important, politics shapes researchers worldviews. I struggle with calling this a problem of “intent“, as Paul Romer put it, as it doesn’t chime with personal impression: The small sample of economists I’ve interacted with generally do seem to have ‘good intentions’ (i.e. to produce research developing policies that promote public welfare), suggesting that factors other than intentions are at work. The idea of a “problem of attention” may be a better description. It captures the notion that all of us carry political ideas with us that may influence our modelling and our interpretation of models unless we pay close attention and exercise self-reflection. That’s hard – for economists and non-economists alike.

To minimize the incidence of problems such as those discussed above, on Twitter I suggested that we might need a variant of Orwell’s “Six Rules for Writing” for Economics. A (revised) version of these rules could be as follows:

1) Never use mathematical symbols where it does not add to clarity and precision relative to natural language.

2) Never use mathematics unless you intend to use it for sake of clarity and precision.

3) Never use mathematical tools before you understand what exactly you want to model and how mathematics can help in doing so.

4) Never use a mathematical model to provide policy recommendations unless you understand what assumptions underpin that recommendation.

5) Never use complex, long, and opaque formulations where simple ones will do – in both mathematical and natural language.

6) Break any of these rules sooner than say or model anything barbarous.

As Paul Romer noted, in parallel to the rules for the writer, there are also rules for the reader – perhaps analogous to Dani Rodrik’s commandments for economists and non-economists. Romer suggests two examples:

“When an assertion is vague, ask for specifics.”

“When an assertion is opaque, assume that it is the author’s fault, not yours, and ask for clarification.”

Efforts to rebuild macroeconomic theory are well under way. If economists, from graduate school onwards, also invest in clear and crisp communication, then we can be hopeful that this will ultimately translate into improved economic policy-making.

Lukas Freund is a graduate student at the University of Oxford and blogs at Spurious Economics. On Twitter he can be found under the handle @_LukasFreund_

It might legitimately be asked what qualifies me specifically to comment on this topic. One answer to this is that as a graduate student I stand with one foot in the research camp, seeing and experiencing both the usefulness and, at times, the temptation to use only technical language; while with another foot I am still standing alongside e.g. policymakers who value the crisp communication of economic findings in intuitively understandable language. Relatedly, fresh eyes may helpfully complement more experienced voices, e.g. because they haven’t grown to take some things for granted.

To illustrate, using heterogeneous agent models typically relies on more demanding solution and computational methods than needed for representative agent models, and yet their development is highly desirable in order to properly take into account the ways in which macroeconomic policy and inequality interact. For reasons such as this, I do not think that e.g. economics graduate programs teach too much mathematics.

For instance, Joan and Richard Sweeney’s story about the birth of recessions as an analogy to babysitting coops – brought to renewed prominence by Paul Krugman – is an excellent example of a mathematics-free “model” that helps uncover basic mechanisms that operative in the economy. It’s a lot more difficult to understand the notion of an economy-wide shortfall in demand if you go straight to a DSGE model, say.