Do economic researchers have the right incentives to communicate their insights as clear policy recommendations? Economist and long-time Italian Ministry of Finance official Fabrizio Ghisellini points out the potential obstacle of ‘loss aversion’ experienced by researchers as well as the policy-makers they are trying to reach. 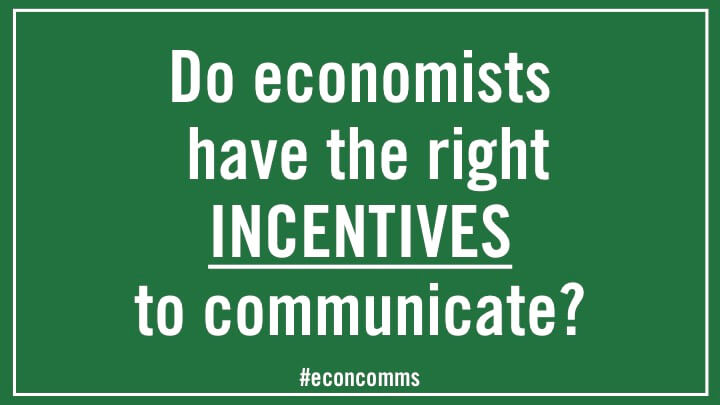 There is a story about Mervyn King, former Governor of the Bank of England, coming back from a summer vacation during which he had read the story of the discovery of DNA and asking why, if Crick and Watson could write their whole paper in 900 words, Bank researchers seemed incapable of summarising their studies in fewer words.

In a way, they do look incapable. Apparently, many economists cannot but write in an abstruse way, mathematically charged and so full of distinctions that eventually the point that the paper should be making becomes entirely blurred. ‘Give me a one-handed economist’, demanded a frustrated President Truman: ‘All my economists say, “on the one hand, this; on the other hand, that”.’

A recent embodiment of the problem is revealed by what happened to Paul Romer just a couple of weeks ago. Romer, a well known economist frequently shortlisted for the Nobel Prize, has spent years investigating the causal link between knowledge and economic growth. So when a few months ago he was called to run research for the World Bank, he thought that the very first thing to do was to boost the diffusion of knowledge via the introduction of precise standards on the way in which Bank researchers write. Papers had to be concise, sequential, clear and free of redundancies.

In particular, Romer noted that the use of the word ‘and’ in World Bank publications had grown disproportionately in the last 50 years, with an average frequency peaking at almost 6% in 2015. So he asked for shorter emails and presentations, but the icing on the cake was when he officially informed the Bank’s economists that final reports would not be cleared if the frequency of ‘and’ exceeded 2.6%. The perhaps foreseeable outcome was that researchers made a united front in rebellion, and on 25 May forced Romer to resign from his oversight position. He was clearly surprised by the turmoil caused, as he commented: ‘It reflected a kind of siege mentality that I can’t quite understand’.

But Romer, as a prestigious senior economist, should have known better. He should have known that people in the World Bank research department perceive themselves as economists first, and only incidentally as World Bank staff. And it happens that most economists, who are typically very protective of their theoretical set-ups, often find it vaguely insulting if someone should remind them that practical results are more important.

Most fundamentally, given that their career perspectives are eventually bound to develop within the academic community, World Bank researchers need to respect that community’s unwritten rules. One such rule requires that before you draw your own conclusions on a topic, you need to show how those conclusions stand with respect to existing research. Assume you are writing a policy paper on fiscal policy effectiveness: irrespective of whether you suggest that fiscal policy is effective or not, you can’t really skip a preliminary survey of the merits and/or the limits of existing research on Ricardian equivalence. That alone will take MUCH more than 900 words. Only after you do that, you are entitled to present your own views on the matter.

If you don’t follow this pattern, it is likely that you would be accused of being superficial by fellow academics, which amounts to a damage to your reputation. Given the phenomenon of ‘loss aversion’, it is not difficult to understand why World Bank researchers united against Romer’s initiatives. It was their (future) job that was on the line.

And there may be another reason why economic papers are written in a stilted and intimidating way. It has to do with the question of incentives to establish working communications with policy-makers. On top of the above career-linked considerations, would researchers really like their policy prescriptions to be translated into actual policy schemes? The answer to this question is not as simple as it may look.

Assume that as an economist I have just written a paper containing an innovative proposal to boost output via selective cuts in public spending. Of course the validity of the proposal is conditional on a number of factors, including, for example, the timeliness of cuts, the invariance of the external macroeconomic environment, the minimum size of the intervention, and many others. What is the likelihood that if a policy-maker picks up my proposal and tries to implement it, all the necessary pre-conditions are met?

Chances are that cuts are timely but the environment is wrong, or the environment is right but action is too timid, or cuts are not done in the right areas. Overall, the probability that my name is associated with a policy flop is non-negligible. And I don’t want that, so, as a kind of insurance policy against possible reputation losses, I will continue to produce highly articulated papers so full of distinctions and caveats that they (safely) verge on obscurity.

And what about policy-makers? Are they desperate for reader-friendly economic research papers? In normal situations, they are not. When things go well and electoral and/or career perspectives look good, loss aversion is at its highest. In such a situation, why should an experienced politician embark on risky innovative policy reforms? So the less readable the research papers, the better.

Of course incentives can be different in highly charged political situations, such as elections. In such situations, in which loss aversion is minimal, the challenger(s) may have an incentive to distinguish themselves and boost their image via the incorporation in their political platform of refreshing and/or controversial policy schemes – remember President Reagan and the Laffer curve?

Overall, it is thus loss aversion, on the part of both the policy-makers and the researchers, which structurally prevents the set-up of more effective communication channels.

Should we do something about it? And if so, what?

Perhaps think-tanks like the Centre for Economic Policy Research could work as makeshift connections, producing Policy Briefs drawing on the research of more than one economist and highlighting feasible policy schemes in 900 words. But still policy-makers would only pick them up when their loss aversion is low enough. It is difficult. In this article, I have outlined the problem, but to suggest a policy solution is perhaps a step too far. But at least the frequency of the word ‘and’ would meet Romer’s requirements, as it represents just about 2.6% of the words used in total!

Fabrizio Ghisellini has been for many years Director for financial operations at the Ministry of the Economy and Finance (MEF), Italy. He is writing here in a personal capacity. More about Fabrizio here.